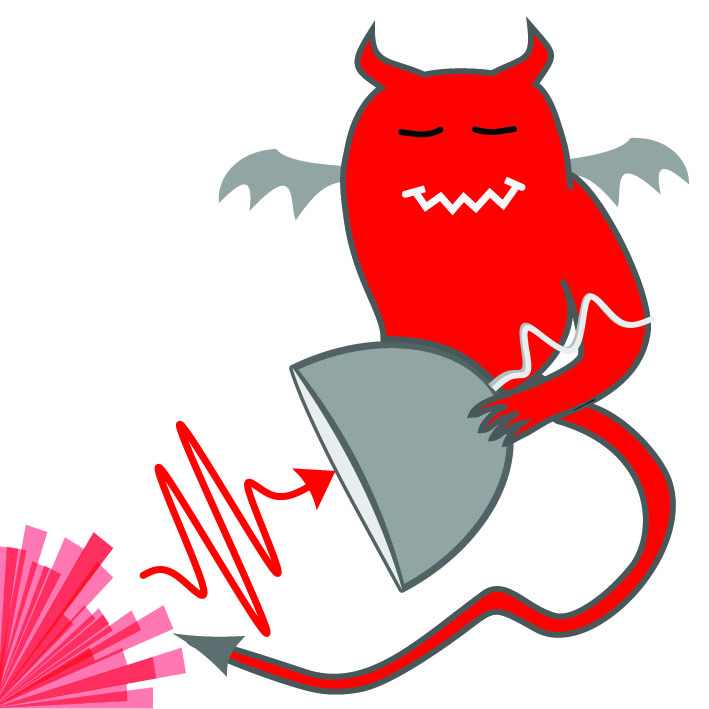 Maxwell's demon, conjured up in a 19th Century thought experiment, has been brought to life by an international team including CQT's Vlatko Vedral in an optical setup. Details appear in Physical Review Letters.

A 'demon' that appears to subvert the laws of thermodynamics has been realised in a photonic system by an international team including CQT Principal Investigator Vlatko Vedral.

"Our work puts forward photonic systems as a platform for experiments related to information in thermodynamics," write the authors in their paper, published 1 February in Physical Review Letters. The paper is highlighted by the journal as an Editor's Suggestion.

The team's work brings to life a thought experiment proposed in 1867 by physicist James Clerk Maxwell. In that century, scientists had developed the laws of thermodynamics, which deal with ideas of energy and entropy. Maxwell's thought experiment was a provocation to the second law – the idea that a system will become more disordered over time, increasing in entropy as it tends to equilibrium.

The second law is something we take for granted in assuming that a hot coffee will cool, or that all the air molecules in a room with an open window won't suddenly disappear out through it.

Maxwell imagined having two boxes filled with a gas at the same temperature and pressure, connected through a small door. The second law tells us that because the gas is in equilibrium, it should stay that way. What's more, we shouldn't be able to use the setup to do any useful work.

Maxwell added a hypothetical demon to probe this conclusion. He pictured the demon operating the door to enforce a one-way flow of gas molecules. The demon watches the molecules bouncing around in the chambers, opening the door when gas molecules on the left side approach, for example, but closing it when those on the right side come near. Over time this would lead to all the molecules being in the right box. The system is now out of equilibrium, and the pressure difference between the chambers could be used to do work.

With modern experimental techniques, researchers have been able to build Mawell's demons in a few setups. The new paper describes what is, to the author's knowledge, the first photonic implementation.

The experiment was carried out at the University of Oxford with the 'demon' operating on thermal light. Maxwell's boxes of gas are replaced by two incoming pulses of thermal light. The demon is a set of photodetectors that measure a few photons from each pulse to work out which is brighter. The pulses go ahead to fall on two photodiodes, generating current that flows in opposite directions towards the two plates of a capacitor.

If the demon weren't there, the two currents would tend to cancel each other and the capacitor would remain uncharged. With the demon, the measurement results are fed forward to swap the polarity of both photodiodes depending on which pulse is brighter, so the bigger current always flows in the same direction. This leads to the capacitor becoming charged. "We find it particularly satisfying that the final effect is easy to see - we can use the setup to charge a battery," authors Oscar Dahlsten and Mihai Dorian Vidrighin told the Oxford Science blog.

The devil is in the detail

The team also worked out a theoretical description of the setup – accounting not only for the thermodynamic effects on the light, but also for the information gained by the demon – and found a good match with the data. It has long been known that the resolution of the apparent violation of the second law by Maxwell's demon (for it is only apparent) lies with the demon itself. The demon not only does work on the system, but also acquires information about the system that it would take work to erase. When all these factors are budgeted for, there's no net gain.

Unpicking the links between information and thermodynamics is an ongoing sport for physicists, particularly in the microscopic systems that are now accessible in experiments. Development of the laws of thermodynamics was originally driven by research on the efficiency of steam engines. Research on quantum systems is prompting scientists to look at these laws anew. Vlatko and his collaborators suggest photonic setups like theirs could be a useful tool for putting recent theoretical work to experimental test.

The other authors are at the University of Oxford, Imperial College London, the London Institute for Mathematical Sciences and the Università degli Studi Roma Tre.