Like watchmakers choosing superior materials to build a fine timepiece, CQT physicists have singled out an atom that could allow us to build better atomic clocks.

The team report in Nature Communications that a previously neglected element – lutetium – could improve on today’s best clocks. Lutetium (Lu) is a rare earth element with atomic number 71.

“The ultimate performance of a clock comes down to the properties of the atom – how insensitive the atom is to its environment. I would call lutetium top in its class,” says Murray Barrett, who led the research.

Murray is so confident because data in the team’s paper, published 25 April, show Lu to have lower sensitivity to temperature than atoms used in clocks today. These measurements add to earlier results showing lutetium could make a high-performance clock.

Atomic clocks have set the global standard for measuring time for over half a century. But since the second was defined with reference to caesium atoms in the 1960s, there has been world-wide competition to improve the accuracy and stability of atomic clocks.

Time signals from caesium clocks still support the Global Positioning System and help to synchronise transport and communication networks, but atoms of many other species, such as ytterbium, aluminium and strontium, now vie to make the most precise measurements of time.

These new generation clocks, with uncertainties around one part in a billion billion, are proving their mettle in testing fundamental physics – from measurements of gravity to looking for drifts in fundamental constants.

The ‘tick’ of an atomic clock comes not directly from the atom, but from the oscillation of a light wave. The oscillation frequency is fixed by locking it to resonant frequency of the atom. 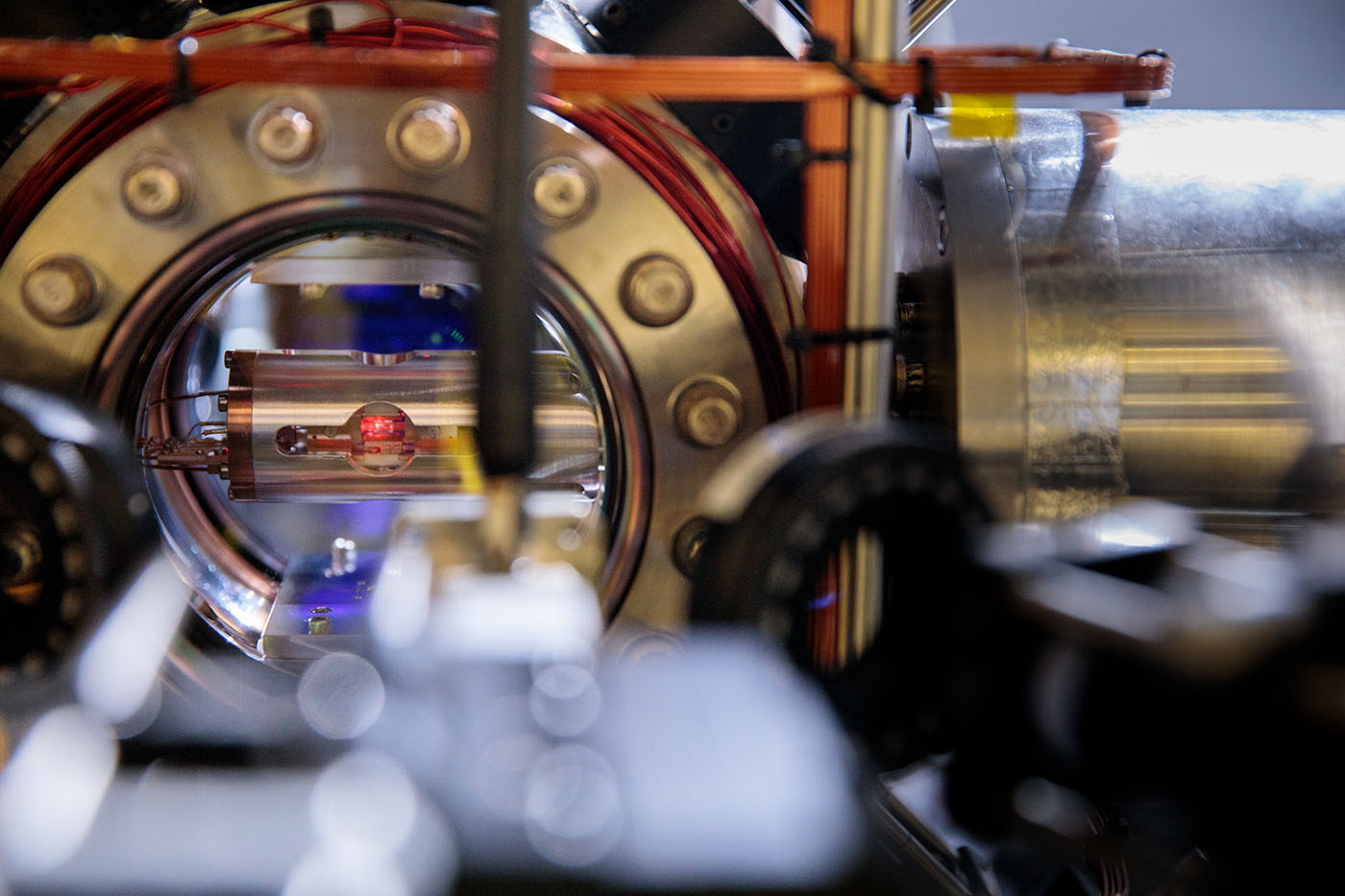 The clock's tick comes from a laser tuned to interact with a single atom trapped in this metal vacuum chamber.

In practice, this means a laser is tuned to make one of atom’s electrons leap from a low energy level to a higher energy level. How much energy this jump takes is a fixed property of the atom. The laser’s frequency is matched to deliver just the right amount of energy in a single light particle (a photon).

Once this sweet spot is found, the clock counts time by measuring the oscillations of the light wave.

Lutetium will also run at optical frequencies, but there’s more to making good clocks than a quick tick: that tick also needs to be stable over time. This is where lutetium may shine.

One source of inaccuracy in the clock frequency is sensitivity to the temperature of the environment surrounding the atom. Barrett and his colleagues have just measured the strength of this ‘blackbody radiation shift’ for clock transitions in lutetium.

The six-month effort, involving a high-power laser like those used for industrial cutting, gave a result for the blackbody radiation shift for one energy level transition that is closer to zero than for any established optical atomic clock.

“We have definitively shown that Lu is the least sensitive to temperature of all established atomic clocks,” says first author Kyle Arnold. That will not only help to make a lab-based clock more accurate, but also make clocks that come out of the labs more practical, allowing them to operate in a wider range of environments.

In earlier papers, the team have reported other properties of lutetium relevant to building clocks, finding they can compete with today’s best clock atoms. “If you can build a good really ytterbium clock, you will inevitably build a better lutetium clock, or at least it will be an easier job for you to build a lutetium clock that’s just as good,” says Murray.

For now, the researchers are working towards building clocks with single ions, but ultimately they’d like to make clocks based on lattices or networks of many ions. They begin with lutetium in bulk form – as a silvery-white metal foil – before boiling a few atoms off into their apparatus.

The team don’t know of any other groups working with lutetium. One reason lutetium was untried is that it needed a new technique, discovered by Barrett and his collaborators, to cancel certain sources of inaccuracy in the clock. This ‘hyperfine averaging technique’ is described in earlier papers. “I don't see it as anyway being an overly technical, difficult thing to do, but I think people are waiting to see how this works out,” says Murray.