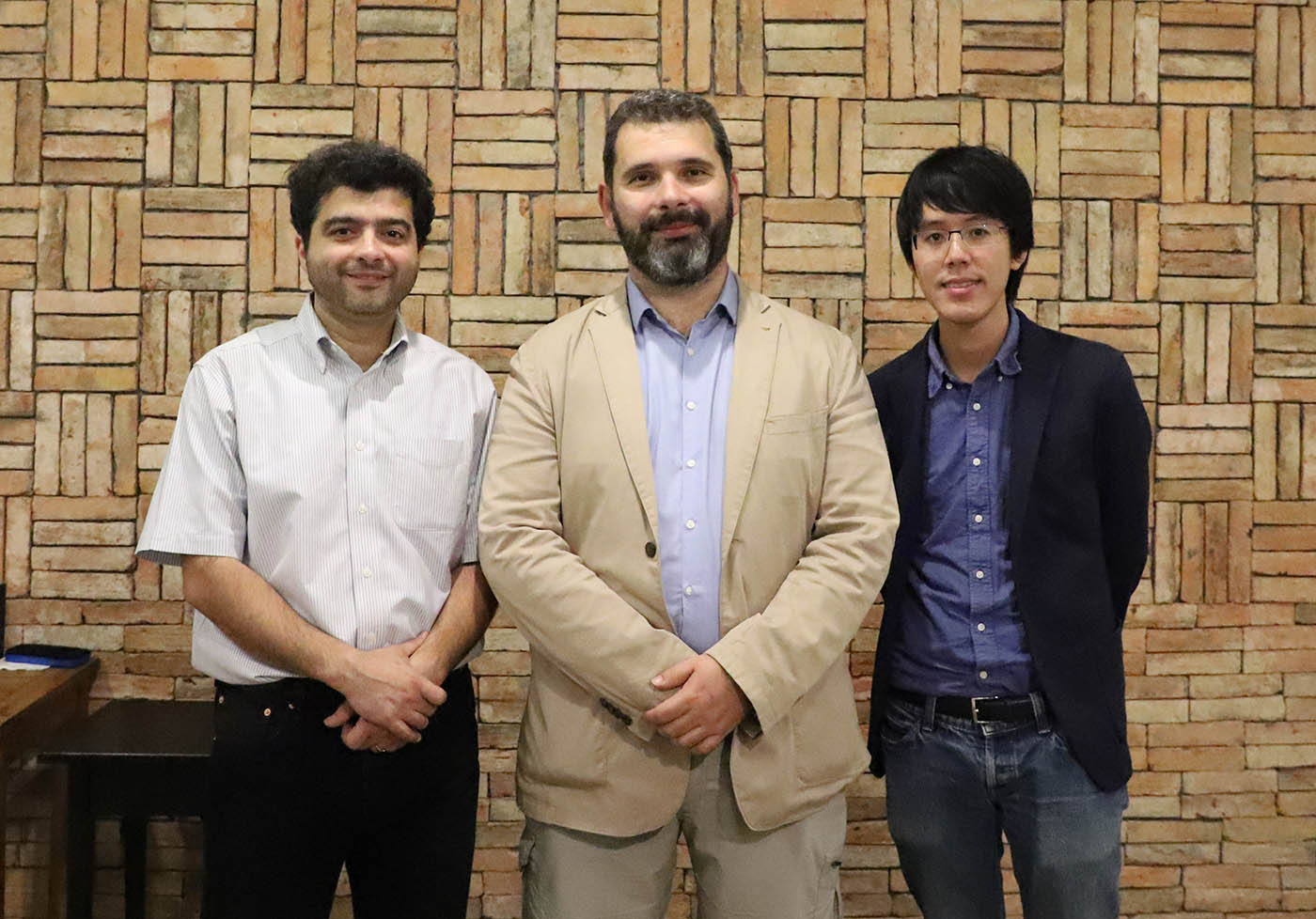 Dimitris Angelakis (centre) received an award from Google for his work on the company's quantum chip with Google collaborator Pedram Roushan (left) and CQT PhD student Jirawat Tangpanitanon (left) and others.

Dimitris received the award from his collaborator Pedram Roushan, a Google quantum electronics engineer, during a public talk they gave together in Singapore in March 2018. As well as a personalised trophy, the award will bring support for further collaboration.

The two teams' scientific work resulted in a publication in the prestigious journal Science in December. They developed a spectroscopy method to map the energy states of photons stored in the quantum chip's qubits, which they applied to two problems. First they simulated a phenomenon known as Hofstadter's butterfly, then they explored a type of quantum phase transition known as many-body localisation.

"I would like to thank the whole team and my student Jirawat especially for all their work in this, as well as Pedram Roushan from Google for the exciting collaboration!” says Dimritis. His group members Jirawat Tangpanitanonen and former CQT Research Fellow Victor Bastidas were coauthors on the Science paper.

The project began after Dimitris and Jirawat met Pedram during a two-month programme at the Kavli Institute of Theoretical Physics at the University of California Santa Barbara (UCSB) in 2015 on 'Many-Body Physics with Light'. Dimitris is one of the pioneers of this field. Pedram is a member of the quantum computing team led by John Martinis at Google and UCSB. Their work continued through conference meetings and Google hangouts.

Having established a strong collaboration, Dimitris invited Pedram to give a colloquium in CQT. That prompted the visit in March. Pedram gave his colloquium on 28 March on "Superconducting qubits, the macroscopic atoms for building quantum processors" (watch the video here). He also teamed up with Dimitris to deliver two public lectures on 29 March in a downtown venue on 'Quantum computers: how they work and what they'll mean for business". The trophy was presented at this event.

"We're thinking about what comes next. We have some interesting ideas for simulations of problems from physics, material science and biology. We are also looking at other areas like applications of quantum approaches in machine learning and big data," says Dimitris.