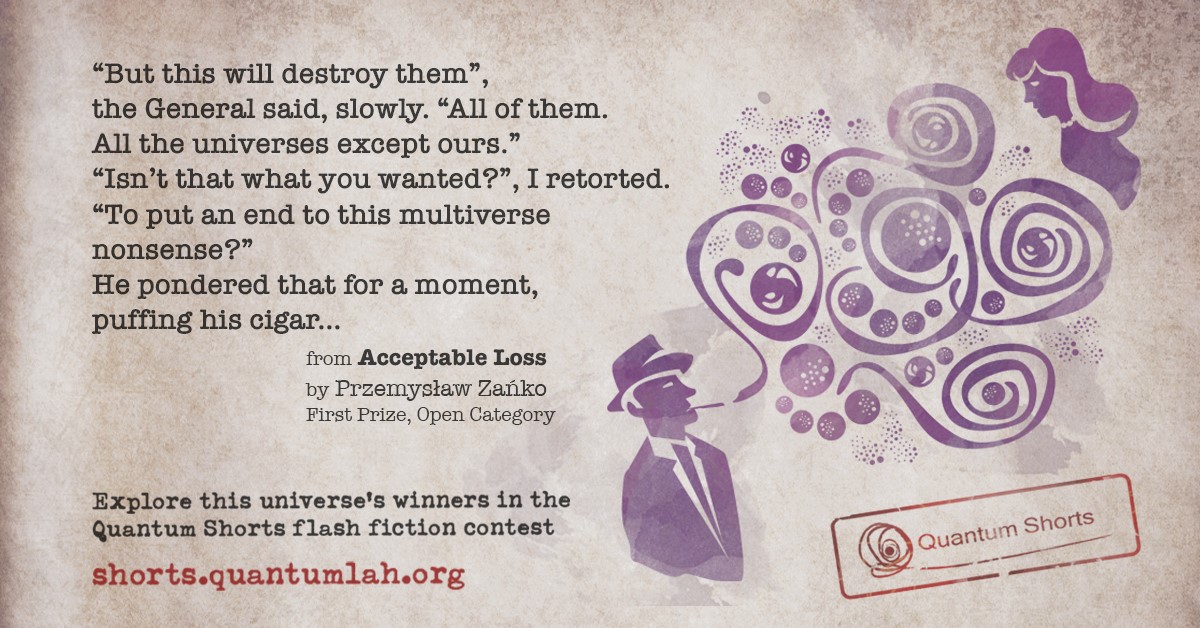 If you’ve ever wished you could escape this world for another Universe, the winner of this year’s Quantum Shorts flash fiction competition offers a cautionary tale.

In “Acceptable Loss” by Przemyslaw Zanko, a failed relationship puts the entire multiverse under threat. The story is one of five to claim prizes in the competition for fiction inspired by quantum physics. Each winner receives a cash award, certificate, and an engraved trophy.

Quantum Shorts is an annual competition for creative work inspired by quantum physics. It is organised by the Centre for Quantum Technologies in Singapore with media partners Scientific American and Nature, and international scientific partners. It has alternated between calls for short films and flash fiction since 2012.

The 2017 call for fiction ended with 18 stories shortlisted across open and youth categories. From these stories, the judging panels have selected a winner and runner up in each of the Open and Youth category. There is also a People’s Choice winner chosen by public poll on the shortlist. The entries had to include the phrase “There are only two possibilities: yes or no”.

“Overall, I thought the standard was really high and the wildly divergent approaches to the quantum world and the constraint were inspiring,” says judge Colin Sullivan, who edits the fiction page in Nature and is the journal’s Managing Editor.

Artur Ekert, Director of CQT and a judge for the open category, was impressed by the way the competition winners explored the ways in which people and technology interact. “Fiction can make us think more deeply about the human side of science, and that’s important to navigate our future” Ekert says.

Przemyslaw Zanko declared himself “speechless” on winning the US$1500 First Prize in the open category, decided by judges including renowned physicist Brian Greene. “Acceptable Loss” also appealed to writers on the panel. Singaporean author JY Yang liked this story best, noting it “manages to create complex characterization in a short space”.

Runner-up in the Open Category is “From the Ruins of Beijing”, in which writer Andrew Neil Gray extrapolates from today’s rapid progress in quantum computing into a fictional future where efforts are being derailed by unexplained noise in the machines. Author and judge Tania Hershman called this a “compelling story” with a “great voice from the opening line”.

In the youth category, for writers aged 13-18, three entries claim prizes. Nick Maslov takes first prize for “Two Words” for a well-told story of the end of the Universe. Singaporean writer and cartoonist Otto Fong called it “ambitious and audacious, like Liu Cixin's Death's End". Physicist Chad Orzel said “I love the scope here. The story packs in a ton of physics.”

Runner-up is “End-User Agreement” by Morgan Long. The judges described it as funny, clever and original. For author and judge Mark Alpert, it was a favourite. He offered the unusual compliment that “The author has mastered the art of scientific and technical gibberish.”

The People’s Choice prize – decided by voting across all the shortlisted stories – also goes to a Youth entry. The story “A Future with Fortran” by Lily Turaski took some 30% of the more than 1200 votes cast. Judge Clara Moskowitz, a Senior Editor with Scientific American, liked it too. She said “This piece was smart and funny, with a fun storyline twist and good use of physics concepts and the constraint.”

It’s particularly fitting for this story to claim the People’s Choice award because the Lily wrote the sentence that all entries in 2017 had to include. The sentence was plucked from Lily’s winning 2015 story “The Qubits of College Acceptance”. She noted with her new submission that she “is thrilled to have her superposition sentence emulated in so many alternate realities in the entries of Quantum Shorts 2017.”

Congratulations to the winners! Read all the stories at shorts.quantumlah.org.