Scientists at the Centre for Quantum Technologies at the National University of Singapore have shown that a photon's shape affects how it is absorbed by a single atom. This artist's illustration is not to scale: in the experiment the photons are some four metres long, while the atom is less than a nanometre wide. Image: Timothy Yeo / CQT, NUS 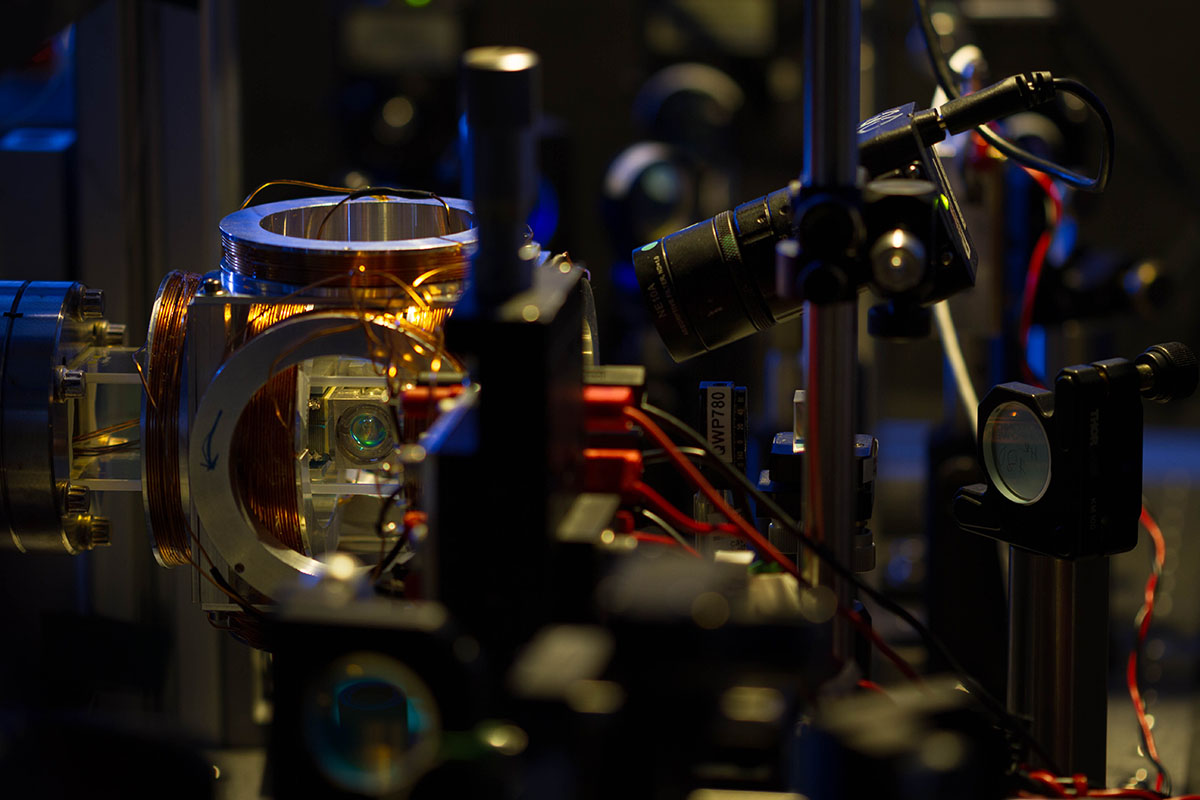 This photograph shows the part of the experiment where the single atom is trapped. The atom is held in the centre of the cube surrounded by coppper-wire coils. Image: Alessandro Cerè / CQT, NUS

Have you ever wondered how you see the world? Vision is about photons of light, which are packets of energy, interacting with the atoms or molecules in what you're looking at. Some photons reflect off, reaching your eyes. Others get absorbed. The main decider of which happens is the photon's energy – its colour.

But look closely at the moment that light meets matter, and there's more to be discovered. Scientists at the Centre for Quantum Technologies (CQT) at the National University of Singapore have just shown that a photon's shape also affects how it is absorbed by a single atom.

We don't often think of photons as being spread out in time and space and thus having a shape, but the ones in this experiment were some four metres long. Christian Kurtsiefer, Principal Investigator at CQT, and his team have learned to shape these photons with extreme precision.

For the research, published 29 November in Nature Communications, the team worked with Rubidium atoms and infrared photons. They shone the photons one at a time onto a single atom.

"Our experiments look at the most fundamental interaction between matter and light" says Victor Leong, for whom the work contributed to a PhD degree.

A four-metre photon takes about 13 nanoseconds to pass the atom. Every time a photon was sent towards the atom, the team watched to see if and when the atom got excited. By noting the excitation times and collecting them together, the researchers could map the probability of the atom absorbing the photon as a function of time.

The team tested two different photon shapes – one rising in brightness, the other decaying. Hundreds of millions of measurements made over 1500 hours showed that the overall probability that a single Rubidium atom would absorb a single photon of either type was just over 4%. However, when the team looked at the process on nanoscale timeframes, they saw that the probability of absorption at each moment depends on the photon's shape.

The rise and fall of a photon

The researchers found that if the photon arrived dimly, from the atom's point of view, then ended brightly, the peak probability of excitation was just over 50% higher than when the photon arrived bright and had a long, fading tail.

Researchers had expected atoms might prefer to soak up the rising photons. That's because of what happens naturally when an excited atom decays. Then, the atom spits out a decaying photon. Imagine running the process backwards – the equations say it should look the same – and the atom would arrive with rising brightness. "Our choice of photon shape was inspired by the time symmetry of quantum mechanics," says coauthor Matthias Steiner.

The work also builds understanding for technologies that rely on light-matter interactions. Some proposals for quantum technologies such as communication networks, sensors and computers require that a photon writes information into an atom by being absorbed. The photon knocks the atom into an excited state. To build reliable devices, scientists will need to control the interaction. "You can only engineer what you can understand," says coauthor Alessandro Cerè.