What does quantum uncertainty have to do with the possibility of a perpetual motion machine?

"…if your theory is found to be against the second law of thermodynamics I can give you no hope; there is nothing for it but to collapse in deepest humiliation" said the British astrophysicist Sir Arthur Eddington in the early 1900s. He was on to something. CQT researchers Stephanie Wehner and Esther Hänggi report in Nature Communications that obedience to the second law of thermodynamics could lie behind one of the most fundamental features of quantum physics: the uncertainty principle.

The second law of thermodynamics says that any system's disorder, known as entropy, will always increase. It's why there's no such thing as a free lunch: the law prohibits us building perpetual motion machines that can do more work than they use up.

The quantum uncertainty principle, meanwhile, limits how accurately two properties of a system can be known simultaneously. For example, the more precisely you pin down the momentum of a particle, the less precisely you know its position. The theory says it's not just an inability to measure the quantities precisely, but an inherent uncertainty. 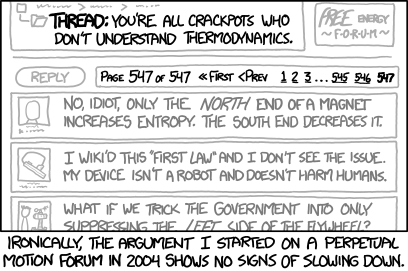 The non-existence of perpetual motion machines is a central tenet of physics, whatever people on the internet say. CQT researchers have found that you need the quantum world's uncertainty to uphold this principle. Comic by xkcd.com.

Why should nature have this fuzziness? The new work gives us some kind of answer. Stephanie and Esther show that if we could break the quantum uncertainty principle, we could also break thermodynamics' second law. If quantum physics weren't uncertain, in other words, we could achieve perpetual motion. They proved this using a technique pioneered by the scientists behind thermodynamics, which emerged from calculations in the 19th Century on the efficiency of engines. Scientists, inspired by the steam engine, analysed the amount of work that could be extracted through various cycles of compressing and heating gases.

In a similar way, Stephanie and Esther imagine an engine that is powered by quantum particles. The particles are contained in a box and are in two different states. Particles of the two states are initially separated by a wall. Stephanie and Esther look at how much work could be extracted from this system over a cycle when the particles are allowed to mix, then separated again.

The researchers took an information theory approach to analysing the cycle. In Stephanie and Esther's thought experiment, the membranes are effectively performing measurements that extract information from the particles. When Stephanie and Esther worked out how to calculate the work output, they arrived at an equation that involves the uncertainty relations.

Previously Stephanie and another collaborator linked the uncertainty principle to another peculiar property of quantum theory known as non-locality (which often shows up as entanglement, a spooky connection between particles). The new work therefore not only provides a new clue about why nature may need uncertainty, but also suggests that thermodynamics might be linked to the existence of non-locality.

See the research paper "A violation of the uncertainty principle implies a violation of the second law of thermodynamics" Nature Commun. 4, 1670 (2013); arXiv:1205.6894. Stephanie is a Principal Investigator at CQT and Assistant Professor in the NUS School of Computing. Esther was formerly a Research Fellow in Stephanie's group, and now works in industry.

Coverage in the media: