Artists Linda Sim and Dario Lombardi spend their residency at CQT developing an art installation inspired by ideas in physics.

Unusual experiments have been happening in a temporary laboratory on the sixth floor of CQT's building. In the "Timensions lab", the experiments are being run not by scientists but by two artists, Linda Sim (known as Linda Sim Solay from 2012) and Dario Lombardi. With 50 metres of fabric, two projectors and some black-out curtains, they have turned a large empty room into an "artistic interpretive analogy" of modern physics theories.

Linda and Dario were invited to work at CQT as artists-in-residence after Linda, who is based in Singapore, initiated informal discussions about their work with CQT researchers. Linda and Dario have been developing the project they call "Timensions" for two years. Conceived as a large-scale contemporary art installation, Timensions takes inspiration from the many-worlds interpretation of quantum theory and the ideas of parallel universes and many dimensions in string theory.

"The visitor is not meant to go in and see this as a science exhibition. The idea is to create an impression," explains Linda. They aim to create an immersive and exploratory experience for the visitor. The images here show the prototype of the artwork built by Linda and Dario at CQT. 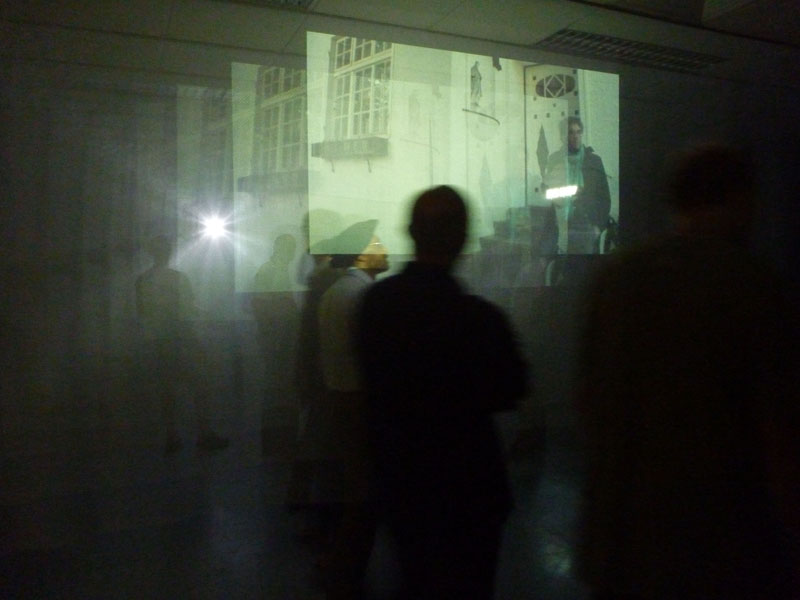 The installation's central element is a series of large semi-transparent curtains, onto and through which a looping video is projected. The visitor can wander between and through slits in the curtains, which reference the idea of parallel universes. The video, meanwhile, shows everyday scenes that have been filmed multiple times, the characters behaving differently in each take. The layering of these scenes calls to mind the many-worlds interpretation of quantum mechanics, which supposes that every event acting on an object's quantum wavefunction triggers a branching of the universe, with every possible outcome allowed by the wavefunction occuring in separate splinter universes.

"Perhaps this exhibition can open a new window to the quantum world through art," says Christian Kurtsiefer, Principal Investigator at CQT and Professor at NUS. For Linda and Dario, the residency provided studio space for them to test their ideas and an inspiring environment in which to explore more deeply the physics their work draws on. To share their ideas, they gave a presentation and hosted an open house in their lab. Linda was resident for six weeks; Dario, who lives in Vienna, for two.

"Before I started the project, I didn't know anything about physics," says Dario, who used to work as a fashion photographer, "in the past two to three years, I have read everything possible." He adds, "I think that scientists have visions like artists. By visions, I mean that I think as a scientist you use mathematics and theory to put things together, then to go forward you have to visualize."

The two artists are in discussions to display the installation in an art venue in Singapore in 2012. They also hope to exhibit Timensions in Dario's home city of Vienna.

Update: Timensions was selected for and exhibited at the Wiener Wunderkammer 2014 at the Vienna University of Technology, Austria, in April 2014.